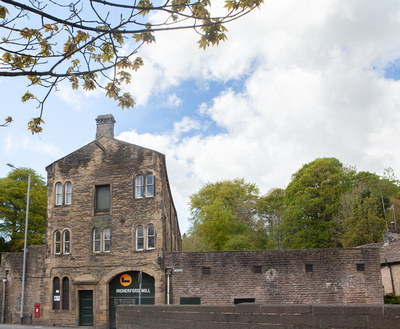 Higherford Mill was built by Christopher Grimshaw as a spinning mill in 1824, close to water to harness it for powering the looms. Water was taken from the river from a weir, half a mile upstream, and channelled to a mill dam or lodge, and then through sluices into the rear of the Mill, onto a breast-shot waterwheel.

In 1832 steam power was introduced to supplement the water power and the square stone chimney was built, with a flue running up the hillside to carry the smoke away. This continued use of water power in conjunction with steam power until the late 19th c is rare, and was one of the reasons why the building was spot listed in 1996.

The Mill ceased production in 1971 and was sold. The new owner converted part of the Mill to workspace units and the rest became derelict. In December 1994 an application was submitted for consent to demolish the Mill, on the grounds that it was unsafe and full of dry rot, and planning permission to build 24 houses on the site. Villagers and Heritage Trust for the North West objected and after a five year campaign, the Trust purchased the Mill with a loan from the Architectural Heritage Fund, in 1999. 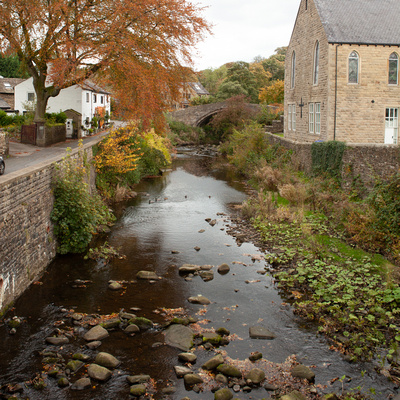 Higherford Mill sits on the banks of the beautiful Pendle Water, which is overlooked by by 17th century cottages and crossed by an ancient cobbled packhorse bridge dating from the 1500's. The river is full of wildlife and looks wonderful in all seasons. This is the view i get every morning and it never fails to lift my spirits!

At the side of the river is the 'Pendle Way' walk.

Lancashire's Pendle Way is a 45-mile circular footpath ranging from limestone meadows to rugged millstone grit moorland. There are hamlets, villages and towns associated with the Pendle Witches and the Brontȅs. Steeped in mystery and folklore is Pendle Hill, the highest point around, and surrounding which are many of the villages and farms which were in some way connected with the famous witchcraft trials of the 1600s.